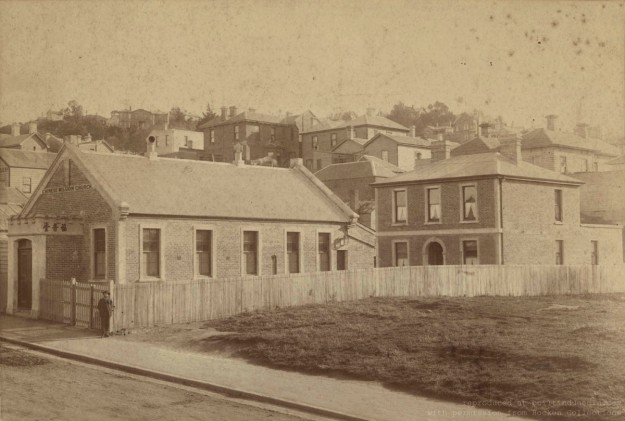 The church and manse as they appeared when first built. Hardwicke Knight Collection, Hocken Collections, P2014-014/3-103.

Much has been written about Dunedin’s church buildings, which is the main reason they haven’t been given much attention here, but when I came across the beautiful and previously unpublished architectural drawing of the Chinese Mission Church in the Hocken Colections, I couldn’t resist following it up further. Much of what follows is drawn and condensed from secondary sources, and to anyone wanting to read more I particularly recommend the writings of James Ng and Susan Irvine listed at the end.

The Presbyterian Church of Otago and Southland established a mission to the Chinese in 1868, when Chinese miners comprised nearly five per cent of the provincial population. Early mission activity was lacklustre and only gained momentum following the appointment of Alexander Don as leader in 1879. After sixteen months with the American Presbyterian Mission in Canton, Don came to Dunedin in 1881 where he underwent theological training before beginning his work ministering to Chinese on the goldfields, based for a time at Riverton and later at Lawrence. The urban Chinese population grew significantly during the 1880s, and in 1889 Don moved his headquarters to Dunedin, taking a small hall at the corner of Lees and Jones streets.

The first hall was small and costly to rent, and in 1895 fundraising efforts for a new building began. In the latter part of 1896 and early months of 1897, a new brick church building was erected in Walker (now Carroll) Street, in an area where many Chinese lived and worked. The site was just down from St Andrew’s Presbyterian Church (led by Rev. Rutherford Waddell) with which it maintained a close connection. A two-storeyed manse was built at the same time as the church, on the rear of the section, and flats were later built on the adjoining property owned by Don. 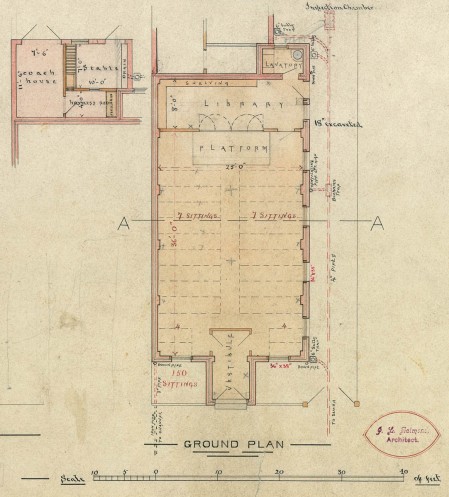 J.L. Salmond’s modest design with exposed brickwork, cement facings, and a small castellated porch, was built by the contractors Crawford & Watson. It bears some similarity to the larger Brethren hall at the corner of Hanover and Filleul streets that Salmond had designed a few years before. The total cost for both church and manse was £1,227, with about half of the cost of construction funded through subscriptions (both within and outside the Chinese community), and half from the Presbyterian Board of Property.

Alexander Don described the interior: ‘The church is 44ft, by 23ft and seats 160. Eight feet at the rear is cut off by a partly moveable screen for a book and class-room, where the mission stock and library are kept and small meetings held. The dark red dado and flesh-tint ceiling harmonise well with the light green distempered walls. Light from without comes through five windows on the east side, two in front and a coloured one on the north: within from 20 gas jets. The western unwindowed wall is divided by buttresses into four bays, and in one of these is hung the beautiful ant-thetical couplet in Chinese (framed and) presented to the missionary.’

The building opened with an afternoon service on Easter Sunday, 20 April 1897. The service began with the ‘Old Hundredth’ psalm sung in Chinese, and Thomas Chang Luke delivered the sermon on Luke 5:36 with John 20:20. The hymns were the gospel favourites Stand Up, Stand Up for Jesus, The Gate’s Ajar for Me, and Jewels. A tea followed, after which there was a meeting in the nearby St Andrew’s hall. Musical items were given by Chan Luke and Wong Hin Ming (Chinese flute), and Wong Wye and Key Chew Leet (harpsichord). More hymns were sung, with ‘the Chinese singing in their own language and the Europeans in theirs’. William Hewitson, William Bannerman, and Rutherford Waddell all gave speeches. Later in the week lantern slide exhibitions showed scenes of China, and viewing the vivid reproductions was an emotional experience for those that had not seen their home country in many years.

From a present-day perspective it is easy to understand why Chinese migrants with a rich and advanced culture, including spirituality of their own, might show indifference or even antagonism towards attempts to evangelise them, especially if they were treated as inferiors. Historian James Ng has led critical re-evaluation of Don and his mission work, stating that though he ‘may be judged as outstanding in moral strength, initiative, determination and perseverance […] he was not successful in evangelising the Chinese’.  Attendance at the church averaged between twenty-five and fifty in its early years and Don baptised only about twenty individuals. Ng claims that it is ‘doubtful if he ever regarded more than a few Chinese as his equal’, an argument supported by the condescension expressed in some of Don’s writings (although this lessened over time). Susan Irvine, while acknowledging Don’s weaknesses, convincingly argues that ‘In comparison to New Zealand Society, his attitudes were enlightened and he championed the Chinese cause in a racist society’. Both writers agree that Don’s legacy is mixed, but also that he earned friendship and respect within the Otago Chinese community, and spoke out against injustices.

Don left Dunedin in 1913 (though he later returned), and with low numbers the congregation continued largely through volunteer efforts. One of the first of the Chinese-born pastors was Foong Lai Law, assistant preacher to Don from 1909 to 1910, and ‘Evangelist to Chinese in and around Dunedin’ from 1926 to 1931. Some time after the outbreak of the Sino-Japanese war in 1937 the Government allowed Chinese women and children to come to New Zealand to be reunited with their husbands and fathers. During the Second World War, when Rev. Andrew Miller was minister, language classes were run to help these new migrants, and domestic and social assistance was also offered. Miller died in 1944 and his wife Ellen (Nellie) afterwards continued in a joint leadership role with Rev. George Hunter McNeur. They were succeeded by Yik Tak Fong in 1951.

Eventually the church shed its ‘mission’ status, becoming the Dunedin Presbyterian Chinese Church, an independent Presbyterian parish within the Presbytery of Dunedin. The brickwork on the building was plastered over at some point and the castellation on the porch removed. In 1993 the congregation moved to the redeveloped former North Dunedin Presbyterian Church hall in Howe Street. It continues to worship there and has a membership of about 180.

The old church was turned over to residential use in the 1990s and the conversion saw two new windows installed in the front wall and the original door and surround replaced with recycled elements. The building’s appearance, still church-like and as modest as it always was, gives little hint of its strong historic and cultural significance. 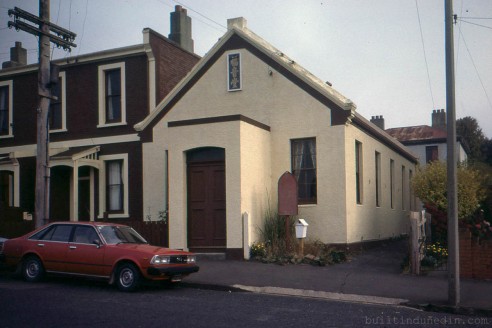 The church in the 1980s, photographed by Hardwicke Knight 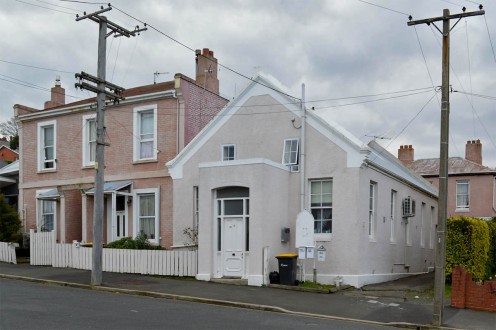 The former church in 2014, with flats at left