New Zealand’s corner dairies are usually found in modest buildings, and this was one of them, but it was more unusual than most with its Arts and Crafts design by architect Basil Hooper. The building was erected between 1907 and 1908 as an investment property for E.E.C. Quick, who let the shop to the grocer Robert Crawford. Edmund Edward Colston Quick was 70 years old and had lived in Dunedin since 1860, when he had gone into business as an importer. He was well known for his company directorships and community work, including eighteen years served as secretary of the Otago SPCA.

Crawford kept the shop for only a short time, and the list of shopkeepers over the years is as follows (dates approximate): 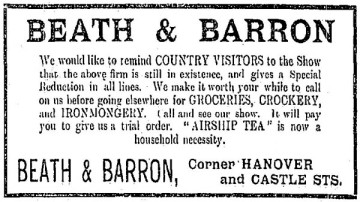 Basil Hooper was apprenticed to J.L. Salmond in Dunedin before he left to study architecture in England. He returned in 1904 as an Associate of the Royal Institute of British Architects, and later described himself as ‘the first young architect to arrive in Dunedin from England, with A.R.I.B.A. after my name, and up to date designs’. He is best remembered in Dunedin for his houses, which include the grand Ritchie residence at 26 Heriot Row. His commercial commissions were less numerous, but introduced elements of domestic Arts and Crafts style strikingly new to this type of building in Dunedin. Surviving examples include the George Street Ironmongery Company’s premises (1908) and the Smith & Co. butchery at the corner of King Edward and McBride streets in South Dunedin (1910-1911). The exteriors of these buildings featured exposed brickwork with Oamaru stone facings, unfortunately now painted over. Quick’s building was also brick, but with roughcast gable ends, and at some later date the brickwork was plastered over. All three buildings featured Marseilles-tiled roofs and their gables were made features rather than hidden behind conventional facade parapets. The South Dunedin shop was described when new as ‘modernised old English’, recognising its Tudor influences.

Former Dunedin Ironmongery Company building in George Street, designed by Hooper in 1908. The brickwork and stonework was unfortunately painted over in the late 1990s. 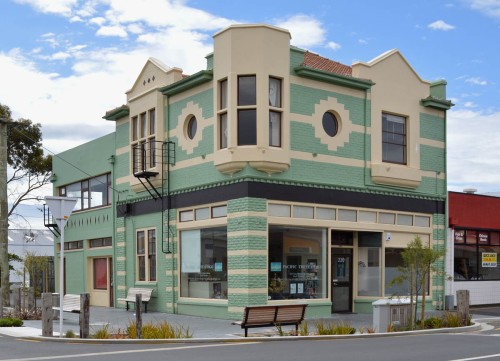 Drawings dated June 1907 show two bedrooms, a living room, and a kitchen on the top floor of Mr Quick’s building, with the commercial space below. The Otago Daily Times published a finely-observed description:

A new shop has lately been completed at the corner of Hanover street and Castle street, to the design and under the supervision of Mr Basil Hooper, A.R.I.B.A. The building is quite unique in its style, as applied to shop architecture, a complete departure from the stereotyped form having been made in this case. In place of the usual high parapet wall and pediments and concealed iron roof, the fronts of the second storey have been formed by a series of gables, with projecting white rough-cast faces. The red Marseilles roof being exposed to view thus blends in most harmoniously with the simple white rough-cast in the gables. A projecting three-light casement bay window forms the centre feature of the Castle street facade, and is flanked on either side by a range of flat casement windows. The shop windows have small panes in the upper portion, and are finished round in exposed brickwork, with a simple brick dentil cornice surmounting the Castle street side. A solid timber verandah, with jarrah posts, shelters most of the two sides. The accommodation consists of a spacious shop, occupied by Mr Crawford, grocer; a large storeroom, stables and outhouses at back, and private entrance hall; and on the first floor a suite of living and bedrooms, bathroom, etc., fitted with every modern convenience. The building has been erected in a most satisfactory manner by Mr John Wood.

The building was demolished around 1966, and is today a car park for the bright orange premises of VTNZ (Vehicle Testing New Zealand). It’s difficult to picture the charming little shop that was once there.

Many other fine Basil Hooper buildings (mostly private houses) remain and to anyone interested in learning more about them I recommend Ralph Allen’s book, Motif and Beauty: The New Zealand Arts and Crafts Architecture of Basil Hooper.

I’ve posted about a few Lower Stuart Street buildings now and there’s a reason why many of them are from the Edwardian period. The development of Lower Stuart Street progressed apace after the site of the new railway station was finally settled in 1902. It was obvious that a lot of foot traffic would soon be using the street, and it wasn’t long before modest wooden buildings disappeared and vacant sites were built on. Within about ten years a dozen substantial new buildings went up. This one was built for A. &. W. McCarthy Ltd, an old firm of gunsmiths, locksmiths, and fishing equipment specialists. Samuel McCarthy had set up business in Dunedin in 1861, originally as a gunsmith, locksmith, and bellhanger. Sam’s sons Arthur and Walter took over in 1890 and the firm then took on its familiar ‘A. & W.’ name.

McCarthy’s new building went up in 1907. Tenders were called in February and the building was completed before the year was out, with the firm moving from their old premises at 65 Princes Street. The architects were Walden & Barton and the building pairs nicely with the Sweeting’s fish shop on the other side of Stuart Street, which they also designed in 1907. The architecture is a composite Edwardian style that draws from various periods, sometimes loosely called ‘Queen Anne’, and transitioning towards more modern styles. The building is large and handsome and on a prominent corner, yet somehow it manages to be unassuming. It’s sympathetic in scale and design with its grandiose neighbours, the Law Courts and the Railway Station. The gentle curves to the first-floor window surrounds are a nice touch, and pilasters, cornices, and recessed panels give interest to the facades. The pediment above the stairway entrance would have been more prominent before the hanging verandah was added. The building contractors were G. Simpson & Co.

McCarthy’s remained in the building for some 90 years but in its later years the shop itself was moved to the old dairy co-operative premises next door in Castle Street. Five generations of the family ran the business. They became the leading importer of English guns and increasingly specialised in fishing equipment. They were famous for their catalogue service (which even drew in overseas customers) and for a time they had branches in Invercargill and Palmerston North. They had shops and offices in the Stuart Street building, as well as workshops for their own manufacturing department. Children were paid to collect bags of cocoon bodies, which were used to make fishing lures. McCarthy’s fishing reels are now collectors items.

The shop kept a modest appearance and Cormac McCarthy recalled: ‘There were a lot of customers over on the West Coast who used to buy the mail order catalogues. They were often terribly disappointed when they got to Dunedin for the first time. They expected a place about three times as big as Arthur Barnett, with rows and rows of guns and fishing rods, and here was this little shop with an old bloke with a beard running around.’

Perhaps unusually for a gunsmith, Arthur McCarthy was a pacifist. He studied socialism and Marxism and opposed conscription during World War I. He was a labour movement activist and became national secretary of the United Labour Party in 1912, and later became involved in the Social Credit movement.  According to his grandson he had a reputation for having a fiery temper and giving firm advice. Caroline Martin recorded that ‘one of the more colourful stories about A.P. McCarthy involved prostitutes from the Railway Hotel next door who were in the habit of throwing their used unmentionables into the shared courtyard below’.

A. & W. McCarthy went into liquidation in 1999, by which time they claimed to be the oldest family-run business in Australasia. The firm’s stock and name were bought by Centrefire, which currently trades as Centrefire McCarthy’s in Moray Place. An immense accumulation of antique stock and memorabilia was sold by auction. 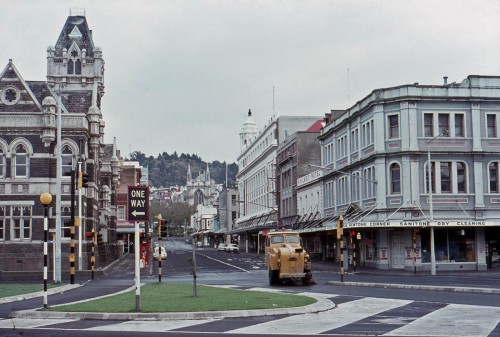 Lower Stuart Street around the 1970s. Photograph by Hardwicke Knight.

Many others have leased premises in McCarthy’s Buildings, which originally included six ground floor shops. The fruiterers, Steel’s, occupied the shop at 10 Stuart for 77 years from 1921 to 1988. Upstairs, an unarmed combat training school has occupied the building for the last 75 years.

Wrestling teacher and unarmed combat instructor Harry Baldock (1905-1991) moved to Dunedin in 1929 and opened a new gymnasium upstairs in the building in 1938. His school became known as the Baldock Institute. During the Second World War, Baldock was the New Zealand chief unarmed combat instructor and physical training instructor at Burnham camp as well as Forbury and Wingatui camps. He taught national wrestling champions and hosted many visiting international wrestlers. His wife, Iris, was a masseuse and physiotherapist who had worked as a nurse at convalescent hospitals for returned soldiers during the war. 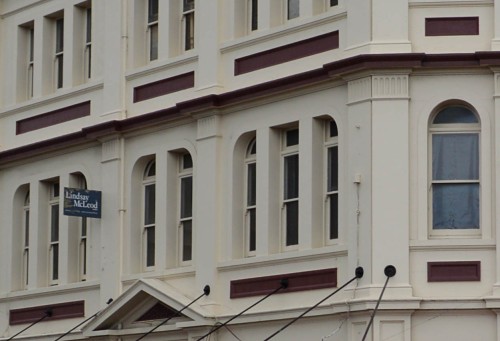 In 1973 Geoff (‘Tank’) Todd began training at the Baldock Institute, initially in weight training, physical culture, wrestling, boxing, and Jiu Jitsu, and later unarmed combat. Todd took over the school in 1986 and it became Todd Group, which refocused towards unarmed combat. As of 2013, the group has an instructing team of over 100 instructors and 30 depots worldwide. It also operates a 280 acre 100-man accommodation training camp. Todd Group still runs a gymnasium at 6 Stuart Street. You can read more about their history on their website.

In 2005 the Stuart Street Potters Co-operative opened a gallery and shop at no.12. Koru Gallery arts co-operative occupies the corner shop.

The exterior of building has changed little apart from the addition of hanging verandahs in 1938. Even the original shop fronts remain; and inside, tongue-and-groove wall linings can still be seen. The building is currently owned by Allied Press. 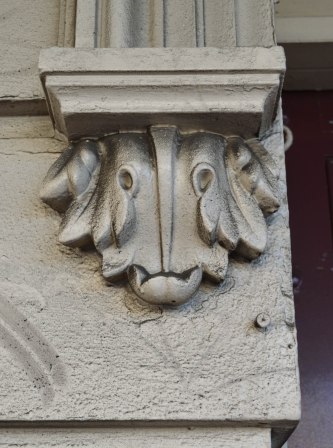