I often start out with the idea of writing a brief post but it never seems to turn out that way! It’s a short one this time, though, on a lovely little Edwardian number that has an impressive street presence despite its small scale. It’s on the corner of Bond and Police streets, in the Warehouse Precinct.

In the early 1870s a modest two-storey brick building was built on the southern portion of the section, with the corner portion left undeveloped as a yard. These were the premises of the builder James Gore, and then his sons Charles and Walter Gore, before they became the tea store and blending rooms of Rattray & Son in 1891. In 1895 they were taken over by the large building supplies firm Thomson Bridger & Co., and the yard was used for the storage of timber and iron. The company had further stores and factory buildings on adjoining sections to the south, where it succeeded Guthrie & Larnach. W.J. Prictor’s detailed and reliable perspective drawing of 1898 shows the site still much as it was in the 1870s, but with some additions to the old buildings. 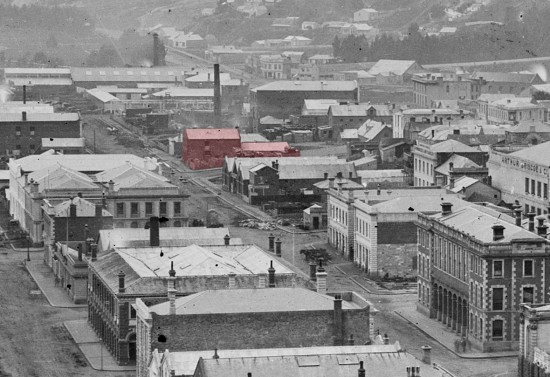 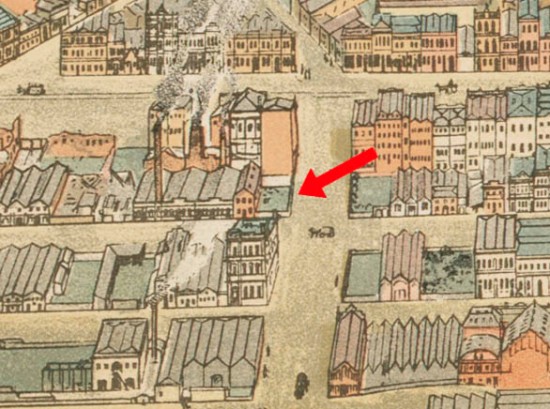 The building on the site today was put up for J.W. Swift & Co., wool brokers and shipping agents. The architects were Mason & Wales and the builder George Simpson, and the building was under construction in May 1905. The street elevations are richly treated in the Renaissance Revival style with a prominent cornice, extensive rustication, and Corinthian capitals. The larger Sidey warehouse on the diagonally opposite corner (designed by James Louis Salmond in 1907) is similarly treated. Among other things, the combination of exposed (though now painted) brickwork with the particular style of rustication are giveaways that these are Edwardian rather than Victorian facades. 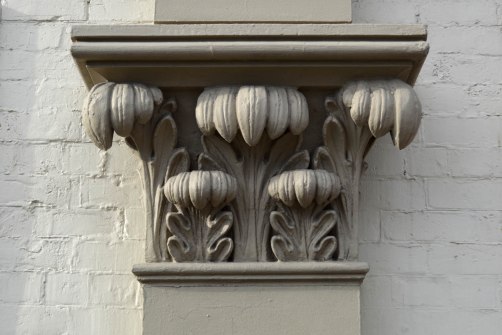 Swift & Co. merged with H.L. Tapley & Co. in 1949 to form the Tapley Swift Shipping Agencies Ltd, but the wool business continued on the site under the J.W. Swift name until about 1958.

Around 1958 J.K. Sparrow & Co. moved into the building. This business of merchants and importers started out specialising in insulation, acoustic materials, and telecommunication devices, and also acted as insurance agents. Over time the focus shifted to catering equipment and supplies for the hospitality trade, and in 2003 the business was purchased by a Christchurch-based competitor, Aitkens & Co. Ltd. Aitkens operated from the building until 2014, when they moved their Dunedin operation to Andersons Bay Road.

Apart from painting, the exterior hasn’t changed much since the building went up, with the main exception being a clumsily integrated show window installed in the Police Street frontage in 1967. Internal alterations in 2009 included the removal of brick walls and the replacement of timber columns with steel posts. Timber doors to both the shop and the vehicle entrances have survived, which is a happy thing as in small buildings features such as these have a significant influence on the overall character. New owners plan to convert the Bond Street building into apartments, which should be a good fit for the revitalised Warehouse Precinct. 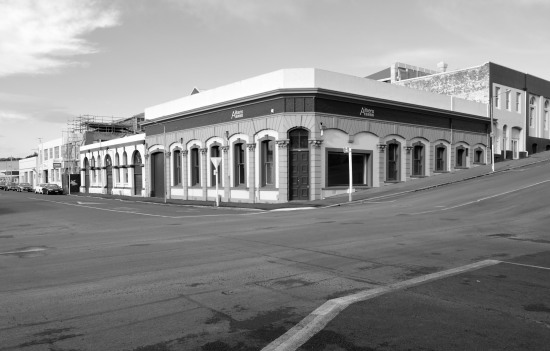