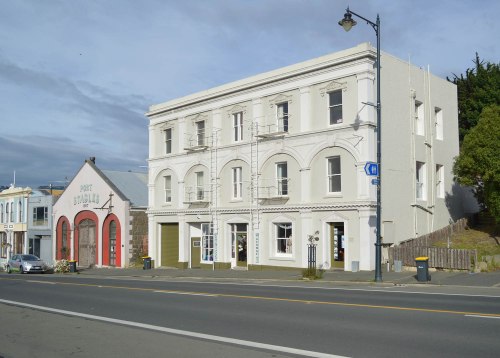 The former Royal Hotel, with 1867 stable buildings on the left

In 1880 Gordon McKinnon was a young architect and contractor based in Port Chalmers, with commissions to design and build two hotel buildings in George Street. Born in Peterhead, Scotland, in 1856, he was the son of Captain Gordon McKinnon, a former whaling ship master who took his family to Otago in 1862. The seaman later captained various vessels and worked as a coastal pilot. Despite the promising start to his career, the younger McKinnon is not mentioned in any books about Dunedin architecture, and the hotel buildings appear to be his most significant works in New Zealand. This made me curious!

The first of the two pubs was the Marine Hotel, now known as the Portsider. The land on which this building stands was excavated and developed later than most of George Street, and at the end of the 1870s was still vacant. In April 1880 the Otago Daily Times reported that construction work was underway:

We have before noticed the fact that many improvements are being carried on in Port Chalmers and among the most prominent of them is the very handsome structure now in course of erection for Mr [William] McLauchlan. It is intended for a hotel, and is situated in the very centre of George street. The style of the building is the decorated Italian, and is from the pencil of a young though very capable architect, Mr Gordon McKinnon, who, although not a native of the Port, has been connected with it from his earliest infancy, and it affords us very great pleasure to record the fact of so fine a building being erected from the designs of this meritorious and rising young artist. The edifice is of the most solid character, being composed of Port Chalmers bluestone foundation, with brick and cement upper works.

Inside, the ‘very ornamental’ public bar was adjoined by a snuggery, and there was also a commercial room with a separate street entrance. Assembly and dining rooms could be combined to form a single large space for balls, concerts, and other gatherings, serviced from a kitchen at the rear. Through the central street entrance was a grand staircase with elaborately-cut woodwork balusters, and on the first floor were a sitting room, four double bedrooms, six single bedrooms, toilets, warm and cold baths, and showers. A large billiard room was described as ‘one of the handsomest we have seen, its decorations being extremely tasteful and elegant, and the ceiling, which is a masterpiece of plasterwork, is to be finished by a centre flower and elaborate cornice’.

A license was issued in September 1880, with John Thomson the licensee. The hotel survived the 1902-1905 no-license period in Port Chalmers and the longest serving publicans were Edward McKewan (1909-1923) and Fred Carter (1926-1947). One of the claims for the Marine was that it was the first hotel in New Zealand to participate in a meals-on-wheels scheme for the elderly, which began in 1965. The hotel became the Marine Tavern in 1967 and in 1976 closed for extensive rebuilding and renovations before reopening as the Portsider Tavern in 1977. The redevelopment project was designed by Allingham Harrison & Partners and included major rearward and southward extensions, and internal rearrangements. Today the exterior retains most of its original decorative features, including pilasters, Corinthian capitals, cornices, swags, and a scrolled pediment. Finials that originally surmounted the blind parapet have been removed and entrances and windows have changed, with somewhat awkward new arches combined with mullioned aluminium-framed bay windows. The render finish to the facade now has a slurry coat. 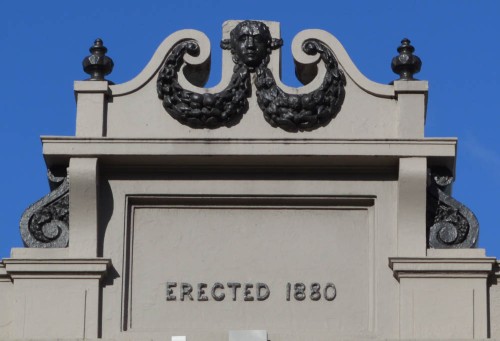 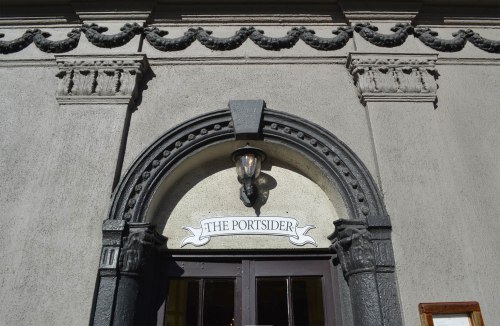 McKinnon’s other hotel project was the partial rebuilding of the Royal Hotel. This hostelry had been established in 1861 with Thomas Christmas Bowern as licensee, and a photograph taken later in that decade shows a large three-storey timber structure with a separate stone and brick stable (the latter was built in 1867 and still stands). From 1876 the proprietor was James Morkane, a ‘zealous and practical’ Catholic from Tipperary, Ireland, five of whose ten children joined religious orders. Between 1880 and 1881 the front portion of the hotel was rebuilt for Morkane to McKinnon’s design, with a foundation of Port Chalmers bluestone and walls above in brick.

The new frontage for the Royal was described in the Otago Daily Times as very handsome and ornamental in character, with a ‘chastely decorated’ facade finished in cement render. A first-floor loggia with large Doric pillars and ornate cast-iron railings extended along the front of the building. This feature was unusual in Dunedin but less so in Australia, and had many precedents in the Italian Renaissance architecture that was the revived style used for the design. On the ground floor were a spacious billiard-room, bar, and bar parlour, approached by a lofty entrance hall with a handsome staircase leading to the first floor, on which there was a large dining room and two sitting rooms. On the second floor were six new bedrooms ‘fitted with the most recent appliances for comfort’. 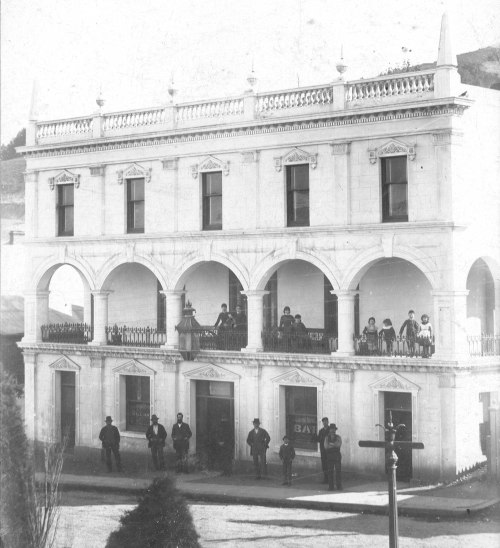 The rebuilt Royal Hotel frontage as it appeared in the 1880s. Photo courtesy of Port Chalmers Maritime Museum Collection. 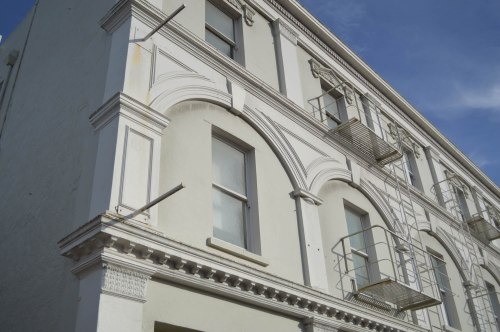 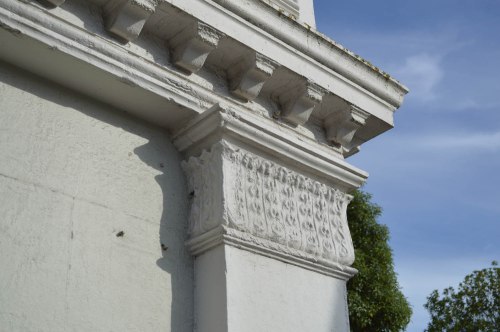 Plans to rebuild accommodation in the rear portion of the hotel appear not have been realised, as the hotel was refused a license in 1885 when it was described as being in a ‘dilapidated and ruinous condition’. The buildings afterwards became a club and a boarding house, and the rear part was eventually demolished. The main uses of the McKinnon-designed portion have been residential, with shops on the ground floor. The loggia was built in at some time before 1920,  a balustraded parapet and  finials were removed in 1947, and fire escapes were added in 1951, but the building retains much of its original character.

And McKinnon? He was declared bankrupt in 1881, likely as a consequence of the hotel projects, and left Dunedin before he could create a sizeable body of work. He went on, however, to enjoy a successful career as an architect in New South Wales, where he established the firm Gordon McKinnon & Sons. His designs included the Parramatta Park gatehouse, Cherrybrook Uniting Church, the School of Arts at Bowral, Symonds’ Building in Sydney (Pitt Street), additions to the house Adamshurst at Albury, and the town halls in Forbes, Inverell, and Albury. He died of heart failure at Katoomba, New South Wales, on 30 June 1922. He was survived by his wife and five sons. 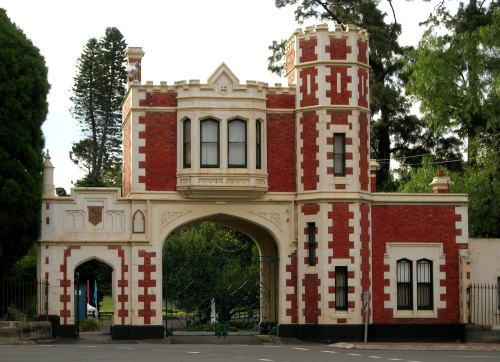 Thanks to Chris Scott and Glen Hazelton for their help with Dunedin City Council records.

2 thoughts on “Marine and Royal hotels”