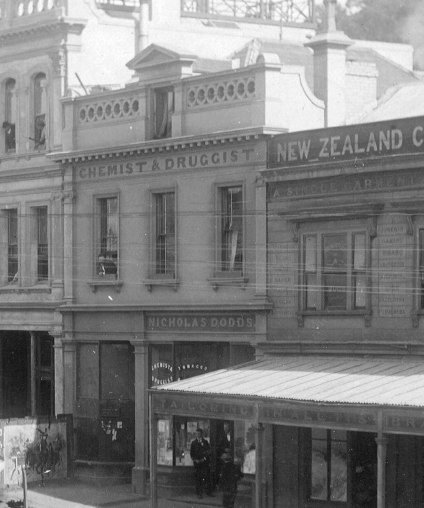 Port Chalmers was home to fewer than 130 inhabitants in 1861, but within five years its population increased to over 2,000 due to the town’s function as the major port servicing a booming province in the midst of a gold rush. By the end of the decade George Street, the main thoroughfare, included a variety of double-storey commercial buildings, mostly constructed of timber.

Photographs taken in the 1860s and 1870s show the site at 6 George Street as a vacant lot between two-storey wooden buildings. In April 1881 the architect David Ross called for tenders for the ‘erection of two shops and dwelling in Port Chalmers for Mr George F. Dodds, chemist and druggist’. George Fawcit Dodds (1838-1894) was born in Jedburgh, Scotland, and had worked for twenty years in a ‘leading house’ in Scotland.

Detail from a Burton Brothers photograph taken in the 1880s, showing the building from the rear. It is the one with the higher roof. Ref: Te Papa C.011788.

A photograph taken in 1900 shows that the northern shop was larger than the southern one. The style of the architecture was Renaissance Revival, with decoration including Ionic pilasters and a dentil cornice. The parapet balustrade featured the repeating circle motif that was a signature ornament of David Ross. At the centre was a dormer window with a small triangular pediment above.

In 1888 G.F. Dodds moved to Akaroa and was succeeded in the Port Chalmers business by his son, Nicholas Dodds (1864-1939), who continued on the site for the next fifty years. It became the UFS (United Friendly Society) Dispensary around 1938, when the UFS moved from its previous address in Grey Street. It remained at 6 George Street until 1987, when it moved to no. 27, ending 106 years of pharmacy operations in the building.

Later changes included new internal partitions (1940), the addition of fire escapes (1951), and further alterations (1964, 1974). The two separate shops have been combined to make one large one, and the original roof structure with attic level has been removed and replaced with a flat roof. The dormer window and ornamented facade parapet have been replaced with a plain blind parapet, giving the facade a more anonymous appearance than it once had.

In the 1990s the building housed the shop Presence, and it is now home to Arleah’s Collectables. 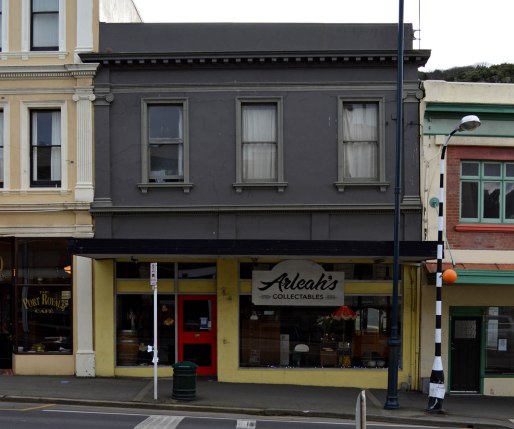 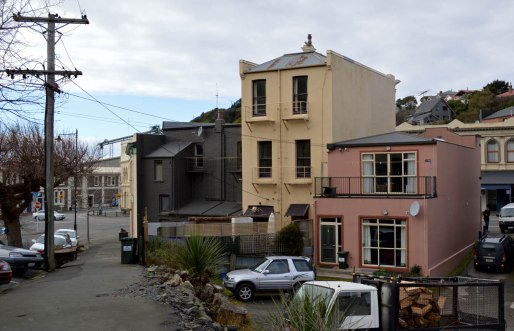