When T.B. Cameron arrived in Dunedin in 1878 he was already an experienced architect in his forties. He worked here for over ten years, but as Hardwicke Knight and Niel Wales tell us in Buildings of Dunedin (1988), ‘apart from the Caversham Presbyterian Church in the 1880s, little is known about him’. A few other things surface from time to time: Cameron submitted the winning entry in the design competition for the Dunedin Town Hall (though R.A. Lawson’s design was ultimately used), and earlier worked in Auckland and Victoria. His role as designer of the Queen’s Arms Hotel (now Empire Tavern) in Dunedin came to notice during the New Zealand Historic Places Trust’s registration of that building in 2012.

What follows is something of a ‘greatest hits’ summary that pulls together a little of Cameron’s story and begins the exploration of his career that is overdue. Although my focus is his Dunedin work, his Auckland career probably produced a greater number of substantial buildings and I would be very interested to hear from anyone with local knowledge or further information about the Auckland and Australian projects listed at the end of this post. Unfortunately, biographical information is elusive. If his sketchy death registration is correct, then Thomas Cameron was born in Scotland in 1836 or 1837. His parents’ names are not recorded on the document, and another blank space suggests that he never married. His middle name, Bedford, is likely a clue to his ancestry, even if he added it when he was a young man to distinguish himself from the many other Thomas Camerons running about the place. 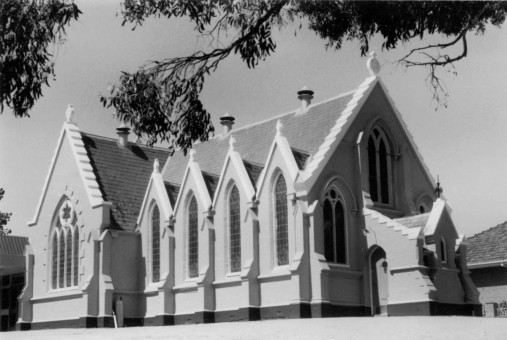 Like some of Dunedin’s other nineteenth-century architects, Cameron migrated from Britain to Victoria, where he worked for a few years before moving on to New Zealand. The earliest documentary reference I found about him was in the Ballarat Star of 13 September 1858, when ‘T.B. Cameron & Co.’ of 1 Bridge Street, called for tenders for additions and alterations to Dr James Stewart’s cottage. I don’t know who the ‘& Co’ were (if anyone), but this tag soon disappeared from Cameron’s notices. If his death record is correct then he would have been in his early twenties at this time, but this is a little difficult to reconcile with a later claim that he had ‘Long practical experience in the Home Country’. In November 1858  he ran the following advertisement:

T.B. CAMERON, Architect &c, 2 Bridge street, Main Road, opposite Humphrey’s Stationery Depot, is prepared to supply plans, specifications, &c, for cottages, shops, warehouses, &c, on the shortest notice, and to guarantee that no building when finished according to the plans will exceed the contract price.

An early project was a hotel with concert rooms in Lydiard Street, built for D. Jones in 1859. Over the next four years Cameron designed many buildings in Ballarat, and also at Creswick, sixteen kilometres to the north. These included the Ballarat Synagogue, which survives today and for which Cameron’s name is still known. Cameron designed the Star newspaper offices, Welsh chapel, Presbyterian church at Creswick, numerous two-storey commercial buildings, and private residences for John Coghill, Theophilus Williams, and others. For a year, from 1861 to 1862, Cameron served as Creswick’s Town Engineer.

In 1864 Cameron moved to Auckland, where he worked for the next thirteen years. He won the design competition for St James Presbyterian Church in Wellington Street, a large Gothic Revival timber building that stood until 1963. He also designed Presbyterian churches at Devonport and Wanganui, the latter being both constructed and destroyed (by fire) in 1868. Cameron was responsible for the design of the Star Hotel in Albert Street, built in 1865, and in 1877 he designed its redevelopment, although only the first stage was completed. Typical features of Cameron’s street elevations were round-headed windows which were relatively wide in proportion to their height. Cameron was briefly in partnership with the architect Arthur W. Burrows from 1865 to 1866. 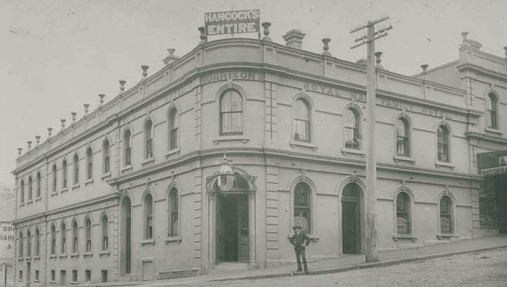 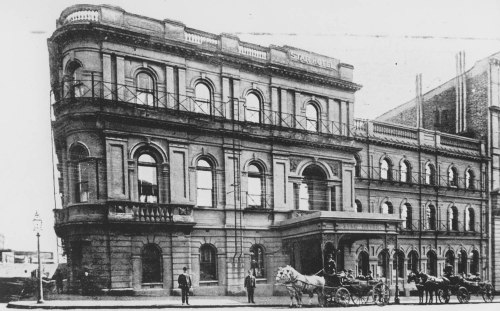 The old Star Hotel in Auckland (right) and what was intended as the first portion of its replacement (left). The hotel was demolished in the early 1980s. Image: Sam Cope (1985) Star Hotel, Albert Street. Copied from postcard lent by H. Hanlon. Auckland War Memorial Museum – Tamaki Paenga Hira, M598.

The only partially realised concept for the rebuilding of the Star Hotel. Image: Sir George Grey Special Collections, Auckland Libraries, 7-A5814.

In 1877, at the other end of the colony, a competition was held for the design of the Dunedin Town Hall, and Cameron entered an imposing classical design with corner tower under the pseudonym ‘In Haste’. In July the Town Hall Committee awarded him first place ahead of prominent local architect R.A. Lawson and seven other entrants. The committee reported that Cameron ‘conformed more nearly to the conditions of the competition than any of the other competitors; and with the exception of the arrangement of the offices for the departments, the design generally possesses considerable merit’. Lawson was appointed supervising architect in September, but as the project had to be scaled back to meet its reduced budget of £7,000, he was asked to make major alterations. The committee had admired Lawson’s front elevations, and agreed that he could adapt his own design rather than Cameron’s. The project was politically controversial, as it was argued that the Town Hall was a luxury the city could do without. Lawson’s finished building included the municipal offices and clock tower, but it would be over 50 years before a public auditorium was added.

Despite the disappointment, or perhaps in part because of it, Cameron decided to move to Dunedin in 1878. There was vigorous building activity in the city and the Town Hall competition would have brought his name to the attention of prospective clients. One of his first commissions was William Gregg’s store and coffee processing building in lower Rattray (now Fryatt) Street. In 1879 he designed two hotels (the Queen’s Arms and the Robert Burns) as well as at least two double-storey houses. Business did not go according to plan, however, as in 1879 Cameron was declared bankrupt with debts of over £600.

The W. Gregg & Co. store and coffee processing building (1878), which still stands in Fryatt Street. The round-headed windows with flanking pilasters are typical of Cameron. Image: advertisement from ‘Beautiful Dunedin’ by W.H. Fahey (1906).

The Empire (originally Queen’s Arms) Hotel in Princes Street. This image was by Hardwicke Knight around 1960, before most of the decoration was removed from the facade.

The early 1880s were Cameron’s most productive years in Dunedin. His designs included a three-storey terrace for Mrs Muir in Moray Place, as well as her two-storey house in View Street, and another three-storey terrace nearby for Robert Murray. There were two investment properties for Albert Dornwell, and other commercial work included shops for Denis Heenan and the Woodhaugh Hotel. One of Cameron’s grandest masonry houses was Appin, built for Angus Cameron of the Union Steam Ship Company, and he almost certainly designed Septimus Myers’ large wooden villa ‘Ivanhoe’ in North East Valley, and a similarly proportioned residence for John McCormick in Queen Street. Recurring features of Cameron’s designs from this period include prominent (usually flat) window hoods, and slender curved pilasters that sometime look a little out of proportion to the rest of the building. A few buildings featured square pilasters with circular decorations at the centre of the shafts. The Queens Arms and Robert Burns hotels were given slightly ungainly parapet decoration, but other commercial buildings were elegantly proportioned. Peter Entwisle cites Gladstone Terrace as evidence that Cameron was an erudite and accomplished designer.

Denis Heenan’ buildings in George Street, built as addition to a David Ross desogn, and recently identified as Cameron’s work by Peter Entwisle. Bold parapet ornamentation has been removed.

John McCormick’s residence (1881), Queen Street. Ornate bargeboards and gothic arches on the verandah are features of this house.

Gladstone (Moray) Terrace, Moray Place. The exterior of the building is well preserved, except that shop fronts have been put in on the ground floor.

Chicksands (1883), the residence of Mrs Amelia Muir. It was designed to complement Mrs Muir’s terrace next door. 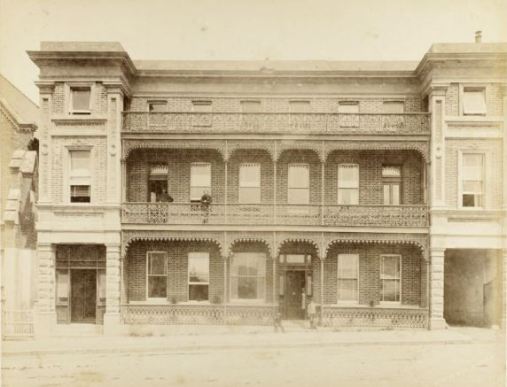 Terrace in Moray Place (1880-1881) built for Robert Murray. The use of decorative wrought iron is striking. The building was demolished in the 1940s. Image: Te Papa O.034104. Burton Bros photographers. 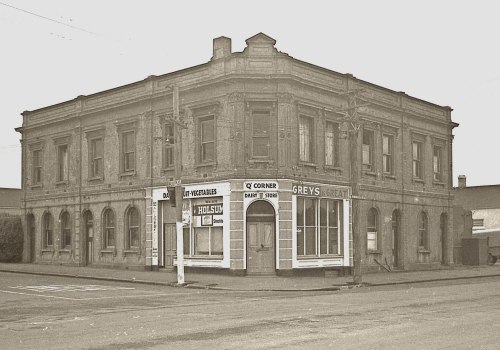 Two-storey ‘tenement’ block at the corner of Frederick and Leith streets. The building was demolished in the 1970s. Photograph by Hardwicke Knight.

Woodhaugh Hotel (1881-1882).The original blind balustrades have been truncated, and a small corner pediment removed. The rounded corners of the first-floor windows are unusual for a Dunedin building.

The Caversham Presbyterian Church is the only church building in Dunedin I have been able to attribute to Cameron. This prominent local landmark includes Romanesque features, and was described as Norman in a newspaper report that was likely informed by the architect. These features include a broad low-pitched roof and round-headed windows. The overall impression, however, is of a free (eclectic) style, and the building also draws from Gothic influences and colonial Victorian design, while its steeple is reminiscent of the Neo-Classical designs of Sir Christopher Wren. Knight and Wales found the building charming, though with something of a wedding-cake appearance. Its unique and imaginative design give it special significance among Dunedin’s suburban church buildings. When the foundation stone was laid on 21 October 1882 the minister (Rev. Fraser) said: ‘This is supposed to be an age of culture, and an aesthetic age…Public buildings are the common property of all, and more so are the homes of the people. If this is so, what an influence for good must handsome buildings and beautiful surroundings have upon the minds of the people’. 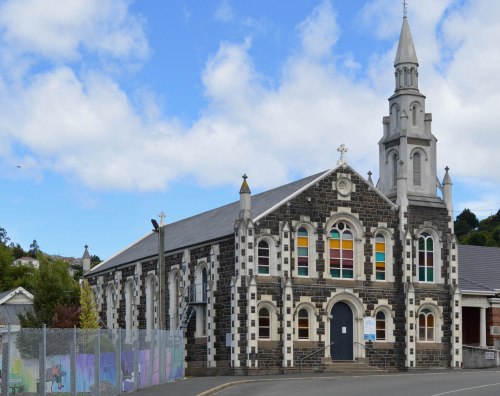 If newspapers are an accurate indication, Cameron’s activity declined dramatically from 1885, and he was again bankrupted in 1886. This came with a general slump in building activity during the Long Depression, which led other architects (including R.A. Lawson) to leave Dunedin. Cameron’s later commissions here included a ‘large hall’ in Moray Place in 1888 (possibly the Palace Roller Skating Rink), and an as yet unidentified ten-room villa in 1889. In 1891 he was the successful competitor for the design of the Kaitangata Borough Council chambers, but this project appears not to have been realised.

Around 1893 Cameron moved to Wellington, and the following year he placed second in the competition to design the memorial to the late New Zealand Premier John Ballance. He kept a low public profile and one of the few things I found about him from this period was that he was a member of the Terrace Congregational Church.  After suffering from pneumonia for a week, Thomas Cameron passed away at Wellington Hospital on 8 July 1894, aged 57. Apparently leaving no family, and with no identifiable photograph of him known, his buildings must speak of his life. 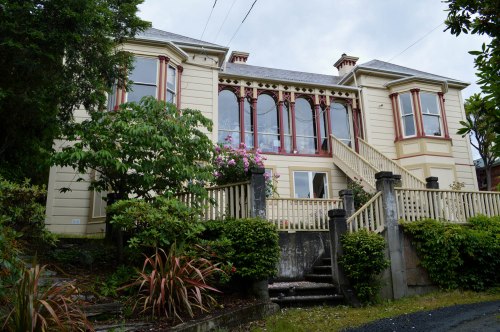 A recent image of Ivanhoe.

Commercial building (1885) at the corner of Moray Place and George Street. It was demolished in the early 1980s. Original parapet decoration had been removed by the time this photograph was taken by Hardwicke Knight in the 1970s. The Palladian windows are similar to the one used at Appin.