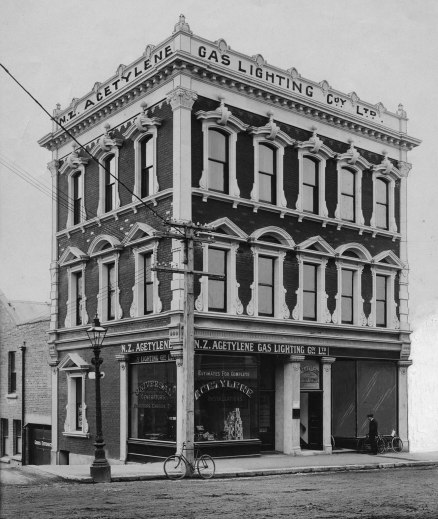 The curious name of the Acetylene Buildings is painted above the door in the historic photograph above. On the parapet and shop fronts is the name of the original building owners, the New Zealand Acetylene Gas Lighting Co. Ltd.

Acetylene lighting became popular in the Edwardian era, particularly for towns or particular properties that were not easily connected to an electricity network. Calcium carbine pellets combined with dripping water to produce the acetylene gas, which was then burned to produce the light. The New Zealand Acetylene Gas Lighting Company was established in Dunedin in 1902, and within a short time branches were operating in Christchurch, Wellington, and Auckland. In 1906 the company was responsible for setting up the street lighting in Picton, the first town in New Zealand to use the system. Kaiapoi and Geraldine followed in 1908, and Opunake in 1909. The company also supplied lighting for private houses such as ‘Aorangi’ at St Leonards, institutions such as Waitaki Boys’ High School, various dredges, and Shackleton’s expedition to Antarctica in 1909. Acetylene cooking stoves and heaters were also sold. A problem with the gas was that it was prone to causing explosions. Eight people were killed in an explosion at a general store at Upper Hutt in 1914. Following a long inquest and vigorous argument, the coroner eventually concluded that gelignite on the premises was to blame rather than acetylene, but the bad press may have hastened the decline of the acetylene lighting in New Zealand, while at the same time electrification was becoming more widely available.

The Acetylene Buildings were erected during the boom in construction that came to Stuart Street after the re-siting of the Dunedin railway station. John Arthur Burnside was architect and he called for tenders for construction in September 1909. George France was the contractor and the buildings, which cost £2400 were finished by April 1910. There were three storeys to Stuart Street, with two shops on the ground floor and generously proportioned offices above. An adjoining workshop building faced Bath Street and acetylene lighting was used throughout. The exuberant Queen Anne styling included prominent window pediments and volutes that echoed those on the nearby Roberts Building, which Burnside had designed six years earlier. Most of the architectural features remain today, but the parapet detail and cornice have been removed and as a result the composition has lost its balance. The brickwork on the street facades has been painted and a hanging verandah and fire escape added.

The Acetylene Gas Lighting Company took the corner shop and workshop. The business was renamed New Zealand Acetylene and Hardware Ltd in 1919, and after downsizing it was reorganised as Electric and Plumbing Supplies Ltd in 1929 and closed in 1956. The corner shop was afterwards taken by the Otago Missionary Association, which ran a book room, and then by the Lullaby Fashion House (children’s wear), between 1961 and 1979. Later tenants included Fiesta Fashions and Toy Traders.

William James Bell, a hairdresser, had the other shop from 1913. He died in 1955 but Bell’s Hairdressers continued at the address until 1985. Its 72 years came close to matching the record of Hendy’s Hairdressing Room in Princes Street. The former hairdresser’s became a Middle Eastern café/restaurant for a few years and is now combined with the other shop as Minami Sushi Bar and Restaurant (opened in 2002). 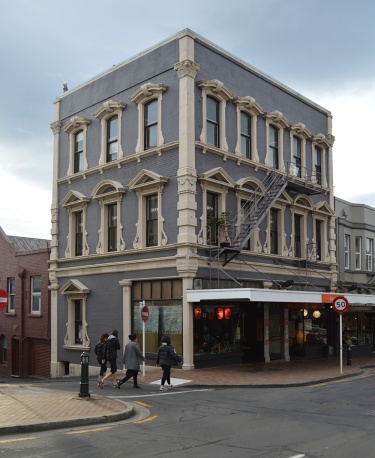 A view of the building from Stuart Street

Up the charming timber staircase, its handrail worn to a fine finish after a century of use, is Lure Jewellery Workshop, established by Ann Culy in 1995. There is a great link here with one of the first tenants in the building, Thomas Long. A manufacturing jeweller, he ran his Zealandia Jewellery Manufacturing Company at the address from 1913. Within five years he dropped the company name, but he continued to work in the building to 1929. Lure has workspace for up to four jewellers and its retail gallery represents up to thirty New Zealand jewellers. On the top floor, jeweller and painter John Z. Robinson has had a studio since 1999.

Other tenants in the upstairs rooms have included August De Beer (indenting agent, 1913-1932), Chrissie Hall (dressmaker, 1913-1925), Robert Bennet (tailor, 1925-1953), and Bertrand Quelch (barrister and solicitor, 1954-1967). The Otago Chess Club (established in 1884) had its club rooms on the top floor from 1941 to 1955. In those days tournaments were typically carried out in a haze of cigarette smoke. I wonder if the concentration of the players was disrupted by the Dunedin Ladies Brass Band, which had its band rooms in the building for a few years after 1946. Watson Studio, photographers, had rooms on the upper floors from 1962 to 1993, and then became the Gary van der Mark studio. 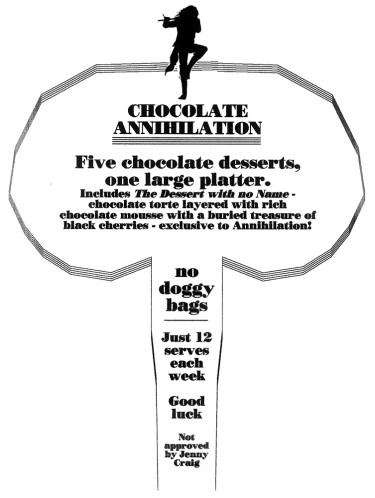 Tull’s Chocolate Annihilation, from the creators fo the Chocolate Massacre. The silhouette of Ian Anderson from Jethro Tull featured on restaurant signage and menus. 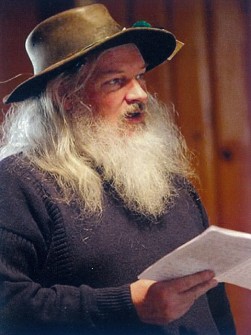 The old workshop fronting Bath Street became a restaurant around 1987. Smorgy’s and Just Desserts were there for a few years before Geoff and Lois SImpson opened Tull in 1993. Named after the rock band Jethro Tull, it was particularly known for its desserts, and had almost a cult following. Diners were awarded a certificate (‘The Blodwyn’) if they were able to finish the Chocolate Massacre, and other dishes paid homage to the band with names such as Aqualung (a seafood salad) and Bungle in the Jungle (a green salad). The Simpsons were folk musicians and the New Edinburgh Folk Club (established c.1977) met at the restaurant on Sunday nights from 1999 onwards. Tull closed following Geoff’s death in 2006, and since 2007 the space has been a Japanese restaurant, Yuki Izakaya. 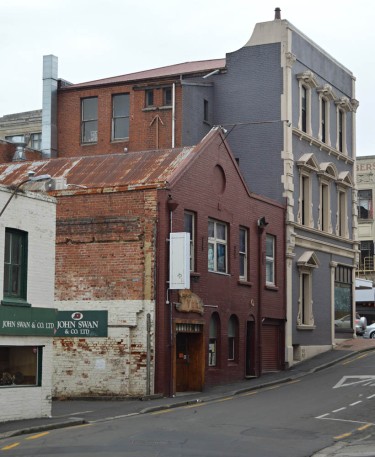 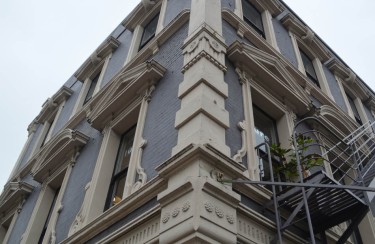 Acknowledgment:
Thanks to Lois Simpson for supplying information about the Tull restaurant.